From Wikipedia, the free encyclopedia

Soy protein is generally regarded as the storage protein held in discrete particles called protein bodies, which are estimated to contain at least 60–70% of the total soybean protein. Upon germination of the soybean, the protein will be digested, and the released amino acids will be transported to locations of seedling growth. Legume proteins, such as soy, and pulses belong to the globulin family of seed storage proteins, called leguminins (11S) and vicilins (7S), or glycinin and beta-conglycinin, in soybeans. Grains contain a third type of storage protein called gluten or “prolamines.” Soybeans also contain biologically active or metabolic proteins such as enzymes, trypsin inhibitors, hemagglutinins, and cysteine proteases very similar to papain. The soy cotyledon storage proteins, important for human nutrition, can be extracted most efficiently by water, water plus dilute alkali (pH 7–9), or aqueous solutions of sodium chloride (0.5–2 M) from dehulled and defatted soybeans that have undergone only a minimal heat treatment so that the protein is close to being native or undenatured. Soybeans are processed into three kinds of modern protein-rich products: soy flour, soy concentrate, and soy isolate. 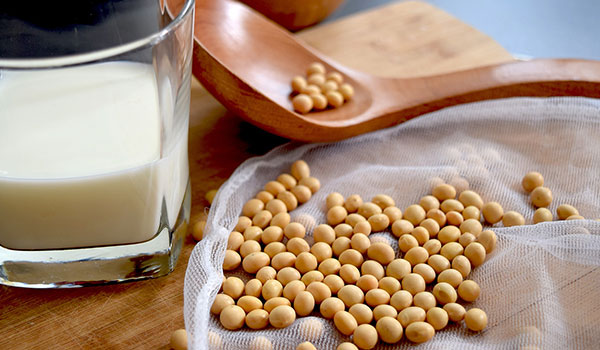 Soy protein isolate {90%protein (N x 6.25) on a moisture-free basis} has been available since 1936 for its functional properties. In 1936, American organic chemist Percy Lavon Julian designed the world’s first plant for the isolation of industrial-grade soy protein. The largest use of industrial grade protein was and still is for paper coatings, in which it serves as a pigment binder. However, Dr. Julian’s plant must have also been the source of the “soy protein isolate” which Ford’s Robert Boyer and Frank Calvert spun into an artificial silk that was then tailored into that now famous “silk is soy” suit that Henry Ford wore on special occasions. The plant’s eventual daily output of forty tons of soy protein isolate made the Soya Products Division into Glidden’s most profitable division.

During WWII, the fire-extinguishing soy protein foam, “Aero-Foam,” the U.S. Navy’s beloved fire-fighting “bean soup,” was the brainchild of Percy Lavon Julian. When a hydrolyzate of isolated soy protein was fed into a water stream, the mixture was converted into a foam by means of an aerating nozzle. The soy protein foam was used to smother oil and gasoline fires aboard ships and was particularly useful on aircraft carriers. It saved the lives of thousands of sailors.

Food-grade soy protein isolate first became available on October 2, 1959 with the dedication of Central Soya’s edible soy isolate, Promine D, production facility on the Glidden Company industrial site in Chicago. An edible soy isolate and edible spun soy fiber has also been available since 1960 from the Ralston Purina Company in St. Louis, who had hired Boyer and Calvert. In 1987, PTI became the world’s leading maker of isolated soy protein. 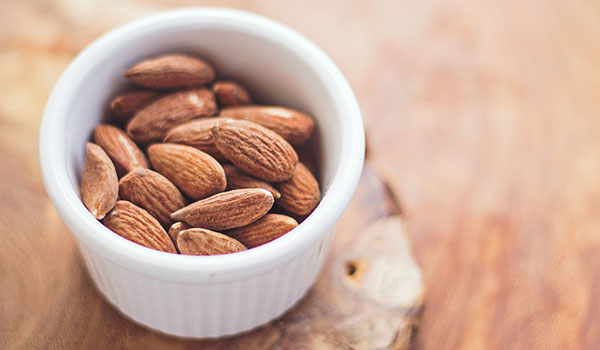 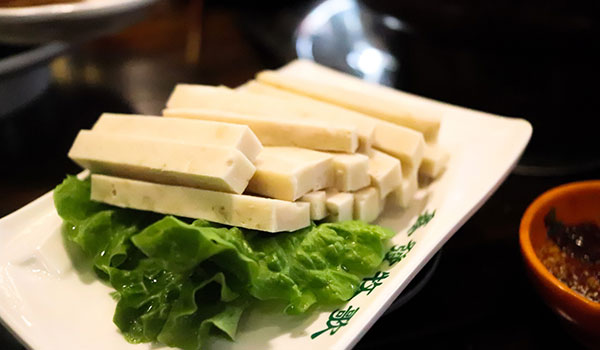 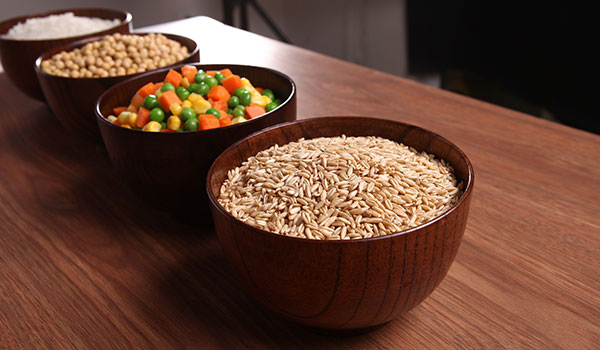 Edible soy protein “isolate” is derived from defatted soy flour with a high solubility in water (high NSI). The aqueous extraction is carried out at a pH below 9. The extract is clarified to remove the insoluble material and the “supernatant” is acidified to a pH range of 4-5. The precipitated protein-curd is collected and separated from the whey by centrifuge. The curd is usually neutralized with alkali to form the sodium proteinate salt before drying

Soy protein concentrate is produced by immobilizing the soy globulin proteins while allowing the soluble carbohydrates, soy whey proteins, and salts to be leached from the defatted flakes or flour. The protein is retained by one or more of several treatments: leaching with 20-80% aqueous alcohol/solvent, leaching with aqueous acids in the isoelectric zone of minimum protein solubility, pH 4-5; leaching with chilled water (which may involve calcium or magnesium cations), and leaching with hot water of heat-treated defatted soy meal/flour.

All of these processes result in a product that is 70% protein, 20% carbohydrates (2.7 to 5% crude fiber), 6% ash and about 1% oil, but the solubility may differ. One tonne of defatted soybean flakes will yield about 750 kg of soybean protein concentrate. 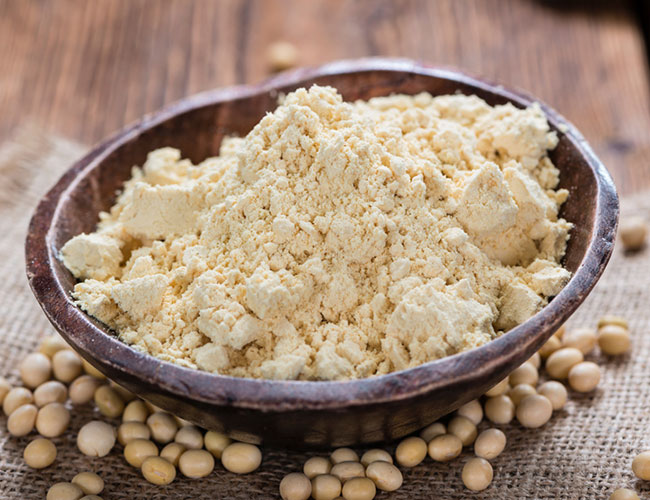 Soy protein isolate is a highly refined or purified form of soy protein with a minimum protein content of 90% on a moisture-free basis. It is made from defatted soy flour which has had most of the non-protein components, fats and carbohydrates removed. Because of this, it has a neutral flavor and will cause less gas due to bacterial flatulence.

Soy isolates are mainly used to improve the texture of meat products, but are also used to increase protein content, enhance flavor, and as an emulsifier.

Currently, the FDA is examining health concerns related to levels of the toxin furan in soy protein isolate and other foods.[1]

Pure soy protein isolate is used mainly by the food industry. It is sometimes available in health stores or in the pharmacy section of the supermarket. It is usually found combined with other food ingredients.

Soy protein concentrate retains most of the fiber of the original soybean. It is widely used as functional or nutritional ingredient in a wide variety of food products, mainly in baked foods, breakfast cereals, and in some meat products. Soy protein concentrate is used in meat and poultry products to increase water and fat retention and to improve nutritional values (more protein, less fat).

Soy protein concentrates are available in different forms: granules, flour and spray-dried. Because they are very digestible, they are well-suited for children, pregnant and lactating women, and the elderly. They are also used in pet foods, milk replacements for calves and pigs, and even used for some non-food applications. 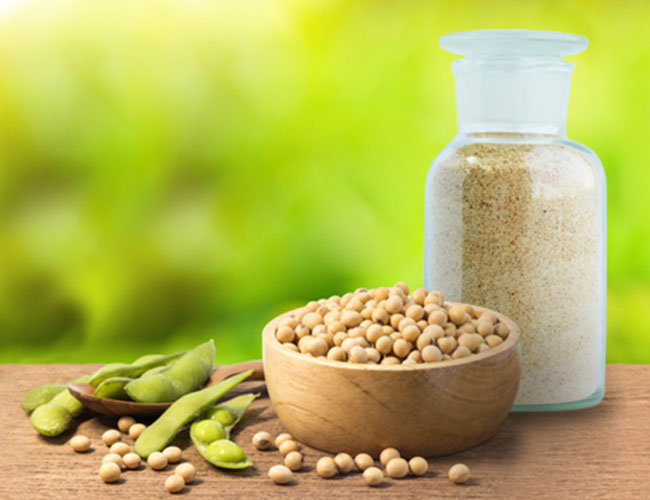 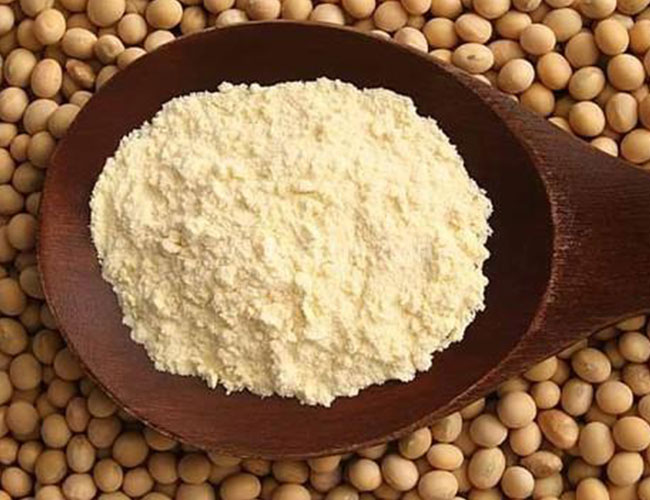 Soy flour is made by grinding soybeans into a fine powder. It comes in three forms: natural or full-fat (contains natural oils); defatted (oils removed) with 50% protein content and with either high water solubility or low water solubility; and lecithinated (lecithin added). As soy flour is gluten-free, yeast-raised breads made with soy flour are dense in texture.

Soy grits are similar to soy flour except that the soybeans have been toasted and cracked into coarse pieces. Kinako is a soy flour used in Japanese cuisine.

Soy is rated as the second most allergenic foods to humans, with the first being peanuts. Soybeans are considered by some to be a “complete protein” source in that they provide all the essential amino acids for human nutrition.[2] However, some scientific sources disagree on this as the best measure of “complete protein.”[3][4][5] Soybean protein is essentially identical to that of other legume pulses (that is to say, legume proteins in general consist of 7S and 11S storage proteins), and is one of the least expensive sources of dietary protein.[6] For this reason, soy is important to many vegetarians and vegans.

Of any studied legume, whole soybeans have the highest levels of phytic acid, an organic acid and mineral chelator present in many plant tissues, especially bran and seeds, which binds to certain ingested minerals: calcium, magnesium, iron, and especially zinc — in the intestinal tract, and reduces the amount the body assimilates. For people with a particularly low intake of essential minerals, especially young children and those in developing countries, this effect can be undesirable. However, dietary mineral chelators help prevent over-mineralization of joints, blood vessels, and other parts of the body, which is most common in older persons.

The digestibility of some soyfoods are as follows: steamed soybeans 65.3%, tofu 92.7%, soy milk 92.6%, soy protein isolate 93–97%.Some studies on rats have indicated that the biological value of soy protein isolates is comparable to animal proteins such as casein if enriched with the sulfur-containing amino acid methionine.

Lafayette Mendel and Morris S. Fine of the Sheffield Laboratory of Physiological Chemistry at Yale University made the observation in the September 1911 edition of the Journal of Biological Chemistry that soybeans produce a positive nitrogen (N) balance in a human subject when they conducted a study to determine the utilization of legume proteins. The treatment called for 5 days of a 2400 calorie diet consisting of meat, eggs, nut butter, potatoes, and fruit, followed by six days where 90.5% of total nitrogen was supplied by soybeans, and then another 5 days of the first diet, minus the nut butter. They discovered that the soy bean nitrogen is “distinctly (if only slightly) less well utilized than that of the preceding and succeeding mixed diets”.

When measuring the nutritional value of protein, the original Protein Efficiency Ratio (PER) method, first proposed by Osborne and Mendel in 1917, was the most widely used method until 1990. This method was found to be flawed for the biological evaluation of protein quality because the young rats used in the study had higher relative requirements for sulfur-containing amino acids than did humans. As such, the analytical method that is universally recognized by the FAO/WHO (1990) as well as the FDA, USDA, United Nations University (UNU) and the National Academy of Sciences when judging the quality of protein is Protein Digestibility Corrected Amino Acid Score, as it is viewed as accurately measuring the correct relative nutritional value of animal and vegetable sources of protein in the diet.Based on this method, soy protein is considered to have a similar equivalent in protein quality to animal proteins. Egg white has a score of 1.00, beef 0.92, isolated soy protein 0.92, and soy concentrate 0.99. In 1990 at an FAO/WHO meeting, it was decided that proteins having values higher than 1.0 would be rounded or “leveled down” to 1.0 as scores above 1.0 are considered to indicate that the protein contains essential amino acids in excess of the human requirements. 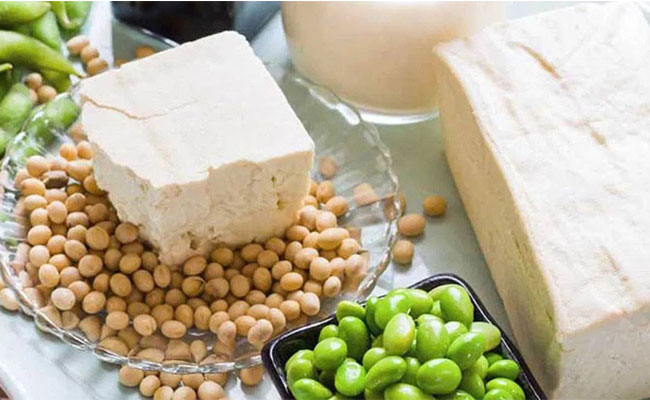 For more details on this topic, see Textured soy protein.

TSP is made by forming a dough from high nitrogen solubility index (NSI) defatted soy flour with water in a screw-type extruder such as the Wenger and heating with or without steam. The dough is extruded through a die into various possible shapes: granules, flakes, chunks, goulash, steakettes (schnitzle), etc., and dried in an oven. TSP made from soy flour contains 50% soy protein and needs to be rehydrated before use at a weight ratio of 1 TSP:2 water However, TSP, when made from soy concentrate, contains 70% protein and can be rehydrated at a ratio of 1:3. It can be used as a meat replacement or supplement. The extrusion technology changes the structure of the soy protein, resulting in a fibrous spongy matrix that is similar in texture to meat.

While TSP has a shelf life of more than a year when stored dry at room temperature, it should be used at once or stored for no more than three days in the refrigerator after rehydration. It is usually rehydrated with cold or hot water, but a bit of vinegar or lemon juice can be added to quicken the process.

TSP can completely or partly replace ground beef in most recipes. It can also replace up to 33% “tuna” fish in tuna salad. It is high in protein and low in fat and sodium. It is also a good source of fibre and isoflavones.